Digital humanities for beginners: get started with the Trove API

Trove is the National Library of Australia’s “discovery interface” – an amazing catalogue of books, newspapers, maps, music, journal articles etc. The Trove API is a special website that programs can talk to run queries, retrieve individual records etc. With some creative ideas and a bit of coding skill, you could make a pretty nifty tool and win a digital humanities award.

The documentation is pretty thorough, but doesn’t tell you how to get started. These days, web development is mostly about assembling the right tools and putting them together, but it can be hard for a novice to know what they need.

This guide is for you if:

In short, if you think the digital humanities might be for you.

As an Australian academic, you can create your own server on the NeCTAR Research Cloud. That would be the best option, but can be a bit fiddly for a novice so we won’t explain that here.

The next best option is to create a server on a virtual machine inside your laptop, using VirtualBox and Vagrant. That keeps everything related to this one project self contained, which is a big bonus when you start working on other projects. It also creates a pristine, controlled Linux environment which means you’re less likely to run into issues cause by the peculiarities of your own system. Try the Vagrant Getting Started guide.

As a last resort, the simplest approach is to just install stuff directly on your computer. This may work ok to begin with.

We’re going to build a web application that will talk to Trove. This isn’t the only approach. You could:

But a web application is probably what you’re going to want eventually and is the easiest to share with other people.

We’ll use Python, the programming language, and Flask, a web application framework for Python.

Why Flask? It’s easy to install, lightweight, and is well suited to experimental programming like this. (An alternative would be Django, which would be much better if you wanted to store stuff in a database and write something big and scalable.)

You can install these on the command line like this:

Making requests to the Trove API

The Trove documentation says that to perform a query, we need to access a URL like this:

You might think you need to construct that string yourself, complete with question marks, equals signs and %22’s. You could do that using Python’s built-in urllib2 library:

But it’s easier than that, if we use the Requests library.

So, install the Requests library as well:

These days, virtually all web applications use a JavaScript framework, to make manipulating the web page more practical. We’ll use jQuery, which is also required by Twitter BootStrap.

Create a directory under ‘trovetest’ called ‘static’, and download and unzip the latest jQuery.

Making a web page look good using straight CSS (cascading style sheets) is really hard. Making it look good in every browser and device is a nightmare. Save yourself the pain, and start from somewhere sensible like Bootstrap, made by Twitter. (By default, it looks a bit like Twitter’s website, but you can change that.) 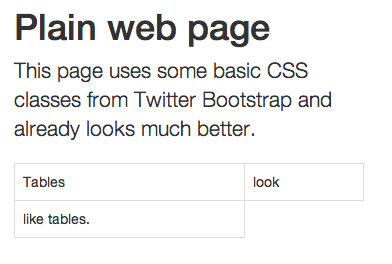 Although it’s best to download both jQuery and Boostrap to your server and link to them there, you can get started quickly by linking to them on the web. Just include this text at the top of your HTML files.

The most common way to build a web page dynamically is by writing a “template” of the HTML page. It can be as simple as this:

When you tell the web application framework to render the page, you pass in the list of variables – in this case, an object called ‘article’ with an attribute ‘name’.

We’ll use the Jinja2 templating engine, because that’s what Flask uses.

Now that everything is in place, let’s write a simple application that will simply make one request. We’ll ask the Trove API for a list of newspaper articles mentioning Piers Anthony (to follow their documentation’s example).

Create this file as ~/trovetest/simple.py

And save this as ~/trovetest/templates/list.html:

On the command line, tell Python (and hence Flask) to run your application:

Flask will sit there waiting for someone to connect to your webserver in a browser.

The results of our little Trove query.

That was a very quick, high level view of all the pieces you need. If you made it through the example, you’re be in an excellent position to start making interesting web applications building on the Trove API. There’s no shortage of information on the web about all these technologies – the hard bit is knowing what you need to know.

All sorts of fun things can be done:

Tim Sherratt (aka @wragge) has made many fun creations with the Trove API, documented on his discontents.com.au blog. Tim works for the Trove team, who are generally pretty happy to help .