10 things I hate about Git

Git is the source code version control system that is rapidly becoming the standard for open source projects. It has a powerful distributed model which allows advanced users to do tricky things with branches, and rewriting history. What a pity that it’s so hard to learn, has such an unpleasant command line interface, and treats its users with such utter contempt.

The information model is complicated – and you need to know all of it. As a point of reference, consider Subversion: you have files, a working directory, a repository, versions, branches, and tags. That’s pretty much everything you need to know. In fact, branches are tags, and files you already know about, so you really need to learn three new things. Versions are linear, with the odd merge. Now Git: you have files, a working tree, an index, a local repository, a remote repository, remotes (pointers to remote repositories), commits, treeishes (pointers to commits), branches, a stash… and you need to know all of it.

The most spectacular example of this is the command “git am”, which as far as I can tell, is something Linus hacked up and forced into the main codebase to solve a problem he was having one night. It combines email reading with patch applying, and thus uses a different patch syntax (specifically, one with email headers at the top).

The man pages are one almighty “fuck you”. They describe the commands from the perspective of a computer scientist, not a user. Case in point:

Here’s a description for humans: git-push – Upload changes from your local repository into a remote repository

Update, another example: (thanks cgd)

Translation: git-rebase – Sequentially regenerate a series of commits so they can be applied directly to the head node

Git doesn’t so much have a leaky abstraction as no abstraction. There is essentially no distinction between implementation detail and user interface. It’s understandable that an advanced user might need to know a little about how features are implemented, to grasp subtleties about various commands. But even beginners are quickly confronted with hideous internal details. In theory, there is the “plumbing” and “the porcelain” – but you’d better be a plumber to know how to work the porcelain.
A common response I get to complaints about Git’s command line complexity is that “you don’t need to use all those commands, you can use it like Subversion if that’s what you really want”. Rubbish. That’s like telling an old granny that the freeway isn’t scary, she can drive at 20kph in the left lane if she wants. Git doesn’t provide any useful subsets – every command soon requires another; even simple actions often require complex actions to undo or refine.
Here was the (well-intentioned!) advice from a GitHub maintainer of a project I’m working on (with apologies!):
Translation: “It’s easy, Granny. Just rev to 6000, dump the clutch, and use wheel spin to get round the first corner. Up to third, then trail brake onto the freeway, late apexing but watch the marbles on the inside. Hard up to fifth, then handbrake turn to make the exit.”

6. Power for the maintainer, at the expense of the contributor

Most of the power of Git is aimed squarely at maintainers of codebases: people who have to merge contributions from a wide number of different sources, or who have to ensure a number of parallel development efforts result in a single, coherent, stable release. This is good. But the majority of Git users are not in this situation: they simply write code, often on a single branch for months at a time. Git is a 4 handle, dual boiler espresso machine – when all they need is instant.

Interestingly, I don’t think this trade-off is inherent in Git’s  design. It’s simply the result of ignoring the needs of normal users, and confusing architecture with interface. “Git is good” is true if speaking of architecture – but false of user interface. Someone could quite conceivably write an improved interface (easygit is a start) that hides unhelpful complexity such as the index and the local repository.

The fundamental promise of any version control system is this: “Once you put your precious source code in here, it’s safe. You can make any changes you like, and you can always get it back”. Git breaks this promise. Several ways a committer can irrevocably destroy the contents of a repository:

9. Git history is a bunch of lies

The primary output of development work should be source code. Is a well-maintained history really such an important by-product? Most of the arguments for rebase, in particular, rely on aesthetic judgments about “messy merges” in the history, or “unreadable logs”. So rebase encourages you to lie in order to provide other developers with a “clean”, “uncluttered” history. Surely the correct solution is a better log output that can filter out these unwanted merges.

10. Simple tasks need so many commands

The point of working on an open source project is to make some changes, then share them with the world. In Subversion, this looks like:

For a Github-hosted project, the following is basically the bare minimum:

In reality though, the maintainer of that Github-hosted project will probably prefer your changes to be on feature branches. They’ll ask you to work like this:

So, to move your changes from your local directory to the actual project repository will be: add, commit, push, “click pull request”, pull, merge, push. (I think)

As an added bonus, here’s a diagram illustrating the commands a typical developer on a traditional Subversion project needed to know about to get their work done. This is the bread and butter of VCS: checking out a repository, committing changes, and getting updates.

“Bread and butter” commands and concepts needed to work with a remote Subversion repository.

And now here’s what you need to deal with for a typical Github-hosted project: 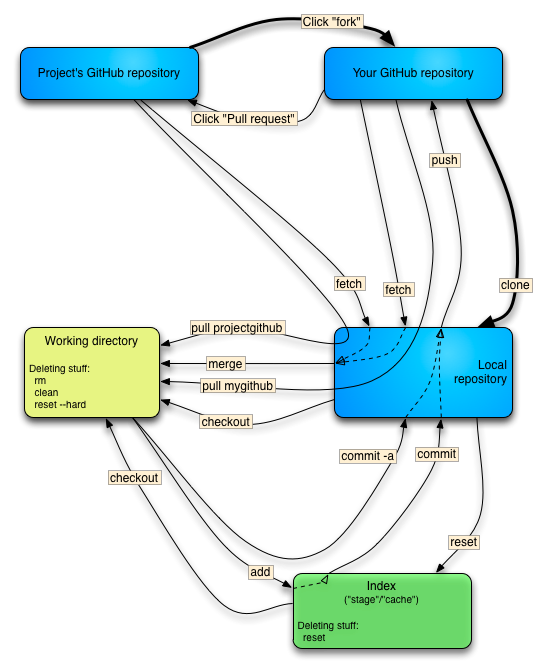 The “bread and butter” commands and concepts needed to work with a Github-hosted project.

If the power of Git is sophisticated branching and merging, then its weakness is the complexity of simple tasks.

This post has obviously struck a nerve, and gets a lot of traffic. Thought I’d address some of the most frequent comments.

To reset one file in your working directory to its committed state:

To reset every file in your working directory to its committed state:

There’s another command where the separator is remotename:branchname, but I don’t recall right now.

Command options that are practically mandatory

And finally, a list of commands I’ve noticed which are almost useless without additional options.